The Thompson Golf Classic is held annually at a golf course designed by Stanley Thompson. It is an opportunity to spend a day with other Society members, member clubs, architects and friends and to experience firsthand the challenge, excitement and classic design elements of a Thompson layout.

Dundas Valley Golf and Curling Club was an amazing host of the annual event, providing a true Thompson experience! The club and the staff ensured a fantastic day was had by all attendees! Over 15 member clubs of the society were represented at the event.

The 2020 Stanley Thompson Classic is scheduled to be held at the Oakdale Golf & Country Club on September 21. Oakdale was designed by Thompson in 1926 and retains a true Thompson experience for players.

Excerpt from Stanley Thompson and Icons of Canada: Muskoka Lakes G&CC, like Windermere, was built for another group of wealthy Toronto summer cottagers. It is generally regarded as Stanley Thompson’s first solo design. Initial construction was begun in the spring of 1920 by TCT before the first nine holes at nearby Windermere had been completed. Lewis & Thompson finished the first nine at Muskoka Lakes G&CC in June 1921 and the entire 18 holes were opened in the fall of 1922. 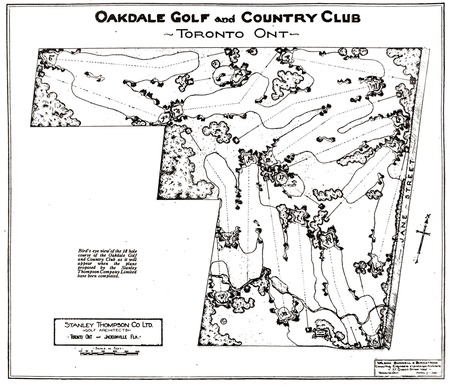