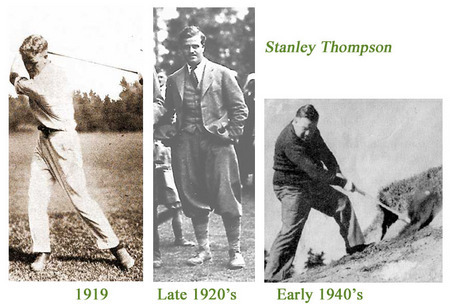 Frank and Bill won four Canadian Amateur Championships between them. Stanley was regarded as possibly the best golfer of them all. A ‘sniper’ of the ball, his low hooking punch shots permitted the run-up shot (which ultimately may have led to his penchant for designing greens with generous front openings), he often played with five clubs. The brothers, it has been said, would drop everything when challenged and meet say, in Chicago, for a match. Traveling by train or car they would arrive at these venues for matches against the greats of the day including Bobby Jones. In any combination, they were often unbeatable.

The four sisters – Marion, Betty, Isobel and Jean – were all bright lights and, typical of the Thompson’s, were story tellers and loved a party. Marion, the eldest next to Nicol, was a fine lady who died at the age of 85. Jean was a socialite who lived much of her adult live in grandeur in Rio de Janeiro where her husband was an executive. Betty and Isobel were, from time to time (as Stanley did with his brothers) seconded to help out at various golf Clubs. Betty, a gardener of note who never married, lived much or her life in Burlington. It has been said that she was the money brains behind the Thompson golf enterprise.