They golfed on dry pastures and sand greens ringed with barbed wire. That was 1897, the year Calgary's golfers formed The Calgary Golf Club. They were golf squatters, playing on vacant land south of the CPR tracks, just behind the Palliser Hotel. As the cowtown of Calgary, population about 3500, expanded, the golfers dragged their nomadic clubhouse south, staying just ahead of the new subdivisions. By 1906, the Club had been pushed two miles south to Elbow Park. There, the members set their clubhouse by the Elbow River, and flagged their fifth green conveniently close to the Blue Rock Hotel, the last whiskey bar on the trail to Fort McLeod (now the corner of Elbow Drive and 4th Street SW). Two years later the more pragmatic members of the Club decided it was time to buy land for a permanent course before the Elbow's annual floods washed their clubhouse away and before more newcomers bought up the last of the open prairie. Fortuitously, one of the members, Barney Toole, was the CPR's land agent and he found a secluded site further upstream in a horseshoe bend of the river that the railway was willing to sell for $100 per acre, payable in ten annual instalments. As a bonus, the Calgary Hunt Club, who had been hunting coyotes on the 123.4 acre site, were willing to sell their clubhouse to the golfers. Faced with these weighty business transactions, the Calgary Golf Club reorganised as The Calgary Golf & Country Club, bought the CPR land and planned its first permanent course. The membership, then approximately 150, paid $5.00 initiation fees and $5.00 annual dues. Alf Briscoe, the Club's secretary/manager, described the opening course as "bare pasture, unfenced, with only a small patch of scrub willows near the sixth green to break up the landscape". This course was designed by the prolific golf course architect, Tom Bendelow, whose work dominated the American mid-west. He paced off the new fairways, staked the cross bunkers and greens on the bald prairie, and left, never returning to see how his plan worked out. Although Bendelow's bunkers and greens were later modified, his basic layout of the fairways has remained unchanged. The popularity of golf boomed as did Calgary's economy and, in 1911, the Club raised $50,000 to build a new clubhouse with stables. The new facilities offered members overnight accommodations, golf, tennis, trapshooting, skating and "other healthy endeavours." The Club retained course architect, Willie Park Jr., in 1922. He revamped the Bendolow design taking better advantage of the terrain's rolling slopes, and adding an irrigation system to create Canada's first watered fairways. (His signature American course is Olympia Fields-North, Illinois, also designed in 1922.) The 1947 Leduc oil discovery resuscitated the Club's war and depression-era finances by bringing new money and new faces to Calgary. Oil company expense accounts soon overwhelmed the clubhouse's resources, and members turned the sod in 1958 for a new clubhouse - the one in use today. Course renovations continued under several architects and consultants - such as Stanley Thompson - through the last half of the century, culminating in a 2005 much-debated decision to restore the course to its 1922 Willie Park Jr. style. This work is now underway, with consultation from architect Ron Forse, and is expected to be completed for play in 2008. As per Barclay notes, the Club did ask Thompson to update the course in 1936. There is no definitive evidence that Thompson made such changes, although Calgary Country Club is included on a Thompson advertisement circa 1940's as below. 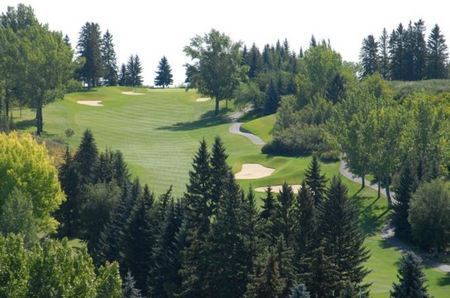 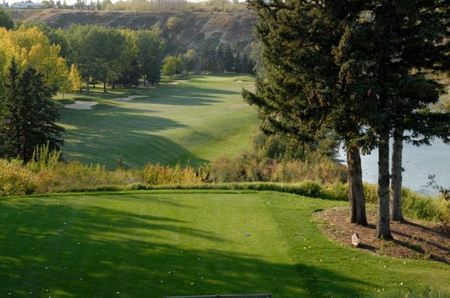 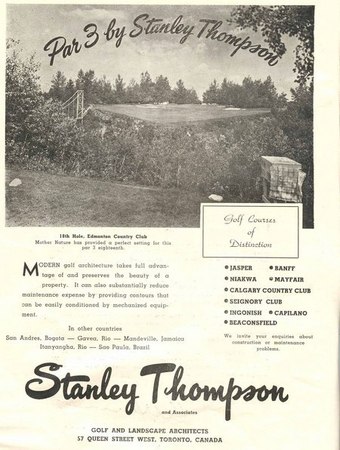