With its spectacular views of the Cuyahoga River Valley and classic layout, Sleepy Hollow Golf Course ranks as one of the great golf challenges in Cleveland. The punitive nature of the course can clearly be seen in the deep ravines which can come into play on its 13 holes. The 64 sand bunkers and large mature overhanging trees are also a threat. Not as obvious, but still treacherous, are the small greens. The course was designed by the flamboyant architect, Stanley Thompson, and opened in 1925 as a private country club on land leased from Cleveland Metroparks. The course opened to public play in 1963. The Scottish links influence can be seen throughout the course. Both nine holes go out, turn around and come back. The early holes on both nines play down hill and down the prevailing wind, therefore seeming shorter than the yardage indicates. The incoming holes play uphill and into the wind, and can play surprisingly long. Some golfers have noted the huge greens on holes #2 and #12 among the other 16 small greens. Those were at one time double greens (currently another par 3 hole #6), which was not an uncommon practice during the period the course was designed. 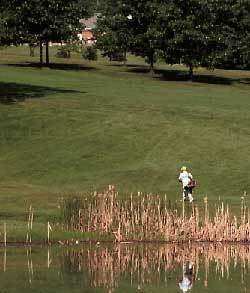