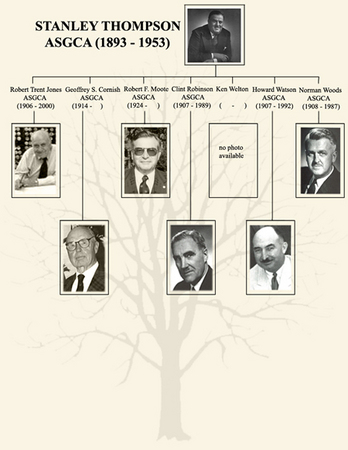 Golf course architecture is the melding of art, science, engineering, environment, recreational outdoor kinetics and appreciative introspection. Training for the profession goes well beyond the realm of formal academia.

Geoffrey Cornish, a disciple of Stanley Thompson himself in the 1930’s & 40’s, has spent a virtual lifetime researching the roots of golf architecture. Mr. Cornish, a noted member of the Canadian Golf Hall of Fame, Honourary Member of the Stanley Thompson Society, Past President of the American Society of Golf Course Architects, co-author with Ron Whitten of Golf Digest of the book The Architects of Golf and designer extraordinaire himself, in a recent Sports’ Illustrated article, "points out, course architecture is learned not in a classroom but in the field, and going to work for an established architect remains the primary path to knowledge.”

As much as being recognized for his unprecedented genius in the creation of exhilarating golf landscapes, Stanley Thompson’s tutoring of a core of young designers led to an on-going lineage of succession that has furthered the spread of the Thompson golf dynamic throughout North America and the world. The likes of Robert Trent Jones Sr., Geoffrey Cornish, Robert F. (Bob) Moote, C.E. (Robbie) Robinson, Ken Welton, Howard Watson and Norman Woods formed an erstwhile group of disciples who themselves continue to breed a lineage of Thompson aficionados, albeit coupled with each’s own individual style and flair.

As Cornish puts it, "Every course architect is a branch on one of 35 design family trees”. The referenced Sports Illustrated article, June 2002, by Mark Leslie rated these lineage trees ranking Thompson’s as No. 5 behind Robertson, Rolland, Tillinghast and Dye, one ahead of Fazio. Not by co-incidence, the Stanley Thompson Society, in working to preserve Thompson courses, looks to encourage and support aspiring golf designers, as well as to garner an appreciation within the devoted fraternity of golfers for generations to come, the legacy that Thompson courses truly are.