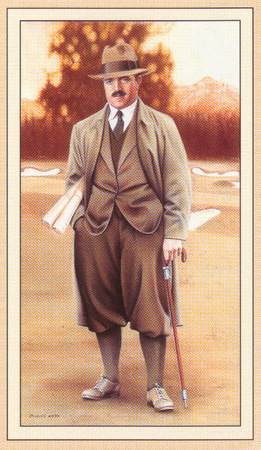 Golf Course architect Stanley Thompson (1893-1953) was a genius who left his mark on the Canadian landscape from coast to coast and further afield in the Caribbean, USA and Central America. His ‘larger than life’ persona resulted in an exceptional contribution to the golf world that has passed the test of time. His legacy includes more than his golf courses: he mentored and trained many prominent golf architects including Geoff Cornish, Robert Trent Jones, Ken Welton, Bob Moote, Robbie Robinson, Howard Watson and Norman Woods, each of whom have mentored others such as Doug Carrick, Ted Baker, Graham Cooke, David Moote, Thom McBroom and Les Furber. As well, he founded the American Society of Golf Course Architects (ASGCA) with the likes of Donald Ross and Robert Trent Jones Sr. A posthumous crowning achievement was the 2005 designation of Stanley Thompson as a Person of National Significance by the Historic Sites and Monuments Board of Canada. In 1980, Stanley Thompson was inducted into the Canadian Golf Hall of Fame and, in 2015, he was inducted into the Canadian Sports Hall of Fame.